I don’t know what has gotten into me lately but I am all about the hummus — pumpkin hummus, butternut squash hummus and just good old regular hummus. I invested in a Vitamix earlier this year and it has changed the cooking game for me. One of the things that I never would have made before the Vitamix is hummus. First of all, I never knew how easy it was, how much better it tasted and how much ‘cleaner’ it is than the store bought brands.

A major plus to making your own hummus is that you don’t get nasty, inflammation breading Canola Oil in it. Did you know that a recent study found that percentages of Canola oil has trans fat added in! Trans fats are high in omega 6 fatty acids – the type that causes widespread inflammation throughout our entire bodies.  Anti-aging experts suggest maintaining a 1:1 ratio or higher in favor of omega 3s is ideal. Unfortunately, the average American eats a ratio of anywhere from 12:1 to 25:1 omega 6 to omega 3!!! Ouch.

Canola oil also is one of the highest genetically modified foods and uses chemical solvents to be extracted as it is not a naturally occurring oil – scientists created the canola plant in the 1970s in response to an FDA ban on rapeseed oil. It has been linked to Alzheimer’s, heart disease, lung inflammation, stroke and cellulite! Gross, get it out of my body!

When I make hummus at home I use @ThriveMarket’s Extra Virgin Olive Oil (the best EVOO I’ve ever tasted). EVOO is high in Omega 3 which is anti-inflammatory. 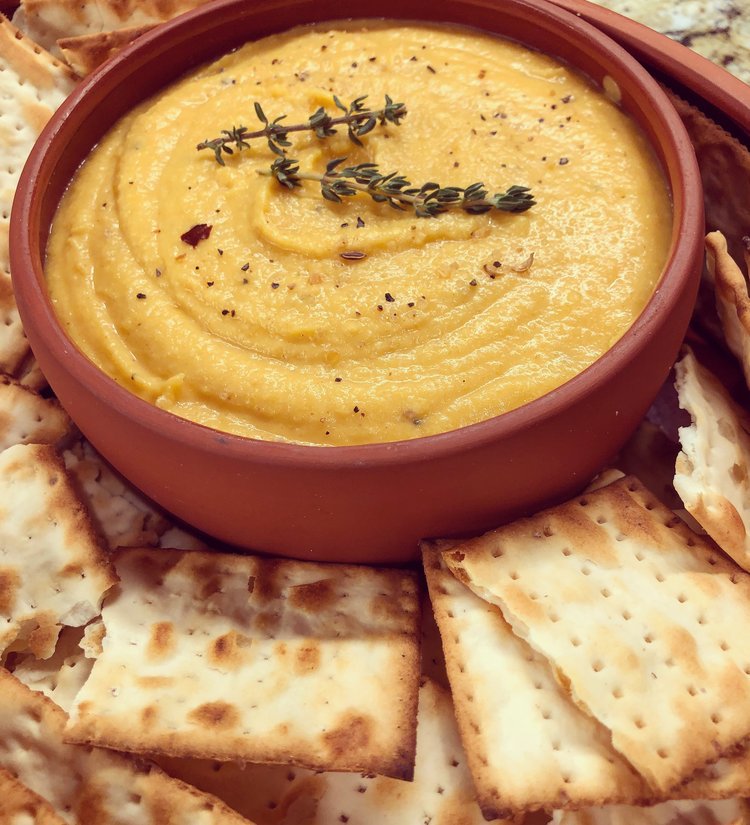 This holiday season, do yourself and your friends a favor and bring some yummy hummus to the party. You will get compliments all night long plus you’ll know where it came from. The recipe is for the butternut squash hummus but you could easily sub in or chickpeas for a more traditional hummus.

← How to Eat, Drink and Be Merry and Still Keep the Weight Off? Digestion need some help? Start your day with this elixir! →
We use cookies on our website to give you the most relevant experience by remembering your preferences and repeat visits. By clicking “Accept”, you consent to the use of ALL the cookies. Cookie Policy
Cookie settingsACCEPT
Cookies Consent

This website uses cookies to improve your experience while you navigate through the website. Out of these, the cookies that are categorized as necessary are stored on your browser as they are essential for the working of basic functionalities of the website. We also use third-party cookies that help us analyze and understand how you use this website. These cookies will be stored in your browser only with your consent. You also have the option to opt-out of these cookies. But opting out of some of these cookies may affect your browsing experience.
Necessary Always Enabled
Necessary cookies are absolutely essential for the website to function properly. This category only includes cookies that ensures basic functionalities and security features of the website. These cookies do not store any personal information.
Non-necessary
Any cookies that may not be particularly necessary for the website to function and is used specifically to collect user personal data via analytics, ads, other embedded contents are termed as non-necessary cookies. It is mandatory to procure user consent prior to running these cookies on your website.
SAVE & ACCEPT