Brain on Fire: Part I – Anxiety, Depression & Coming off an SSRI

Brain on Fire: Part I – Anxiety, Depression, & Coming off an SSRI

This blog is a bit different from others in the past in that it’s a mixture of my personal experience in rebalancing my brain AND educational resources for you. Just as always, my story is shockingly NOT uncommon. In fact, since originally writing this blog I’ve seen two clients with very similar brain chemicals & symptoms. In Part I of this blog, we’ll discuss how I believe I developed anxiety & depression. In Part 2 we’ll discuss what I did to get off the SSRI.

How I got there

Every symptom is your body talking to you, and brain based symptoms are no different. Anxiety and depression are cues from the brain that something needs to be paid attention to. Often there are several layers to where these feelings can come from. For example societal pressures, parental modeling, abuse, biochemical imbalances, GI issues, inflammation (which can really come from many places too). Everyone’s individual cumulation of triggers is unique. Let’s explore some of mine.

p.s. you can also hear this full story on my podcast. 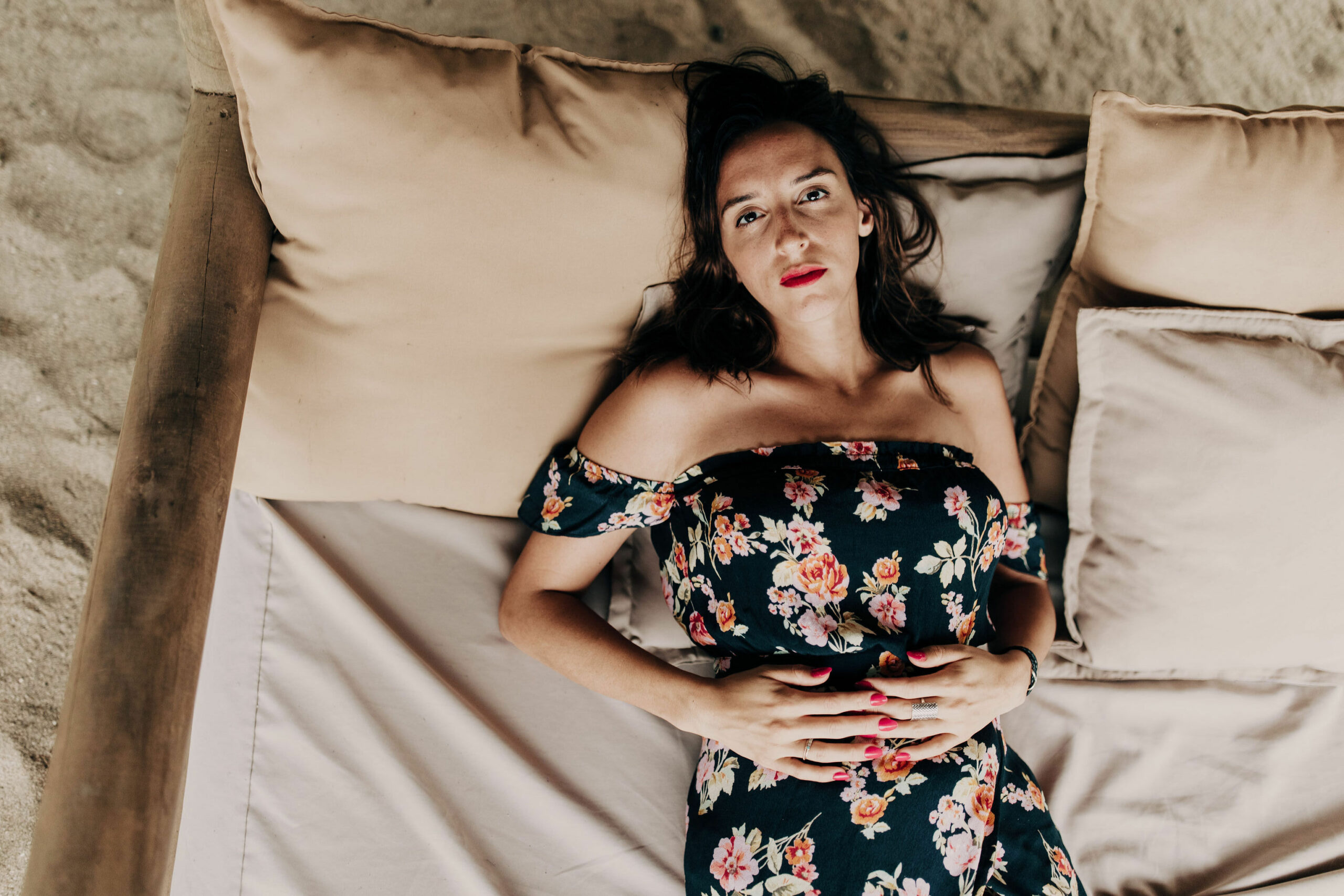 Why is it that everything comes back to inflammation?

As I explain in the above podcast, when I was young I had two things happen that I believed initiated a release of inflammation through the body and brain. The first thing that happened was an exposure to a pathogen in Mexico that lit my gut on fire. After this event & by the time I was 16 I was dealing with daily gut symptoms like diarrhea, gas, bloating, reflux. Then a few years later I was exposed to some emotional trauma with a boyfriend (btw trauma is anything that can become lodged in the body that you do not have the capacity to process). I’m not going to go into the specific incident as I do not want to cause any of you any trauma. Needless to say, this situation was very anxiety producing.

I just dealt with all these symptoms for so long that I started to think it was normal. It wasn’t. What was actually happening was a release of inflammatory cytokines. There are a number of inflammatory cytokines (or messengers) that let our body know there’s inflammation occurring. These markers include C-reactive Protein, IL-1, IL-6 and TNF-a. Studies have shown that elevations in these inflammatory markers relate directly to depression.

We also know that this can be a bi-directional conversation between the gut and brain. I believe this is exactly what happened to me. In the brain we can have microglial cells whose job it is to protect our nerve cells which protects against inflammation, aging and disease. In life we can have priming events (like emotional trauma, toxic exposure, food sensitivities) that can all make the microglial cells change from protectors to releasers of inflammation. They are still trying to protect us from the onslaught of what they perceive is a threat, but in doing so they essentially release this systemic inflammation which can contribute to fatigue, aging, overwhelm, sense of stress.

Those inflammatory cytokines that I was talking about are housed in your immune system, 80% of which is in the gut. Which means that how well our gut is functioning directly impacts our inflammation. When the lining of the gut becomes impaired from stress, toxins, medications & pathogens the lining of the gut becomes compromised and leaky. A leaky gut will allow those toxins, undigested food molecules & pathogens in our gut to irritate the immune system. This irritated immune system will release those inflammatory messengers and they will spread throughout the entire body.

One particular inflammatory toxin called LPS (which is shed from the outer layer of certain bacteria in the gut & we can measure this on lab tests in practice), can cross the blood brain barrier contributing to neuro-inflammation.

To make matters worse: your gut is where you absorb these nutrients and 95% of serotonin (happy brain chemical) is found in the gut.

Hormonal Birth control can deplete the body of: Magnesium, Zinc, Folate, B6, B12 and the amino acid Tyrosine. Compare that to the building blocks of our brain chemicals – Neurotransmitters. Guess what you need? B6, B12, Folate, Zinc and Tyrosine as well as choline, vitamin C, Omegas, Iron.

Birth Control has been linked to depression & other mental health issues and even an increase in suicide. I have no way of knowing now whether my medication was correlated to my mood but I believe we need to be taking a harder look at these medications so we can make the best possible decisions for our bodies.

What do you do when you are experiencing anxiety & depression? You go to the doctor & you are usually prescribed therapy & an anti-depressant. I was given just that approach. I was put on an SSRI called Lexapro. SSRI’s keep the serotonin you do have in circulation which is great at the beginning and really makes you feel like there’s a floor beneath you. This was what I relied on for my mental health for years and gladly. But over time because they aren’t making new serotonin I started to have issues with serotonin production and the symptoms of low serotonin came back (carb cravings, insomnia, weight issues, depression)

To top all of this off – I didn’t know that antidepressants can pull even MORE nutrients out of your body. The same exact nutrients that help with brain cognition and function! Critical nutrients like the B vitamins, Magnesium and CoQ10 are often depleted in those taking psychiatric drugs.

If you are looking for a full deep dive on this topic I highly recommend this blog which discusses several nutrients, many of which I have used to help me along my journey (more on that in part 2).

I should also say, I’m in NO WAY saying you should stop your medication. This is a decision to be made solely by you and your doctor. To be completely transparent, this medication helped me for years. HOWEVER, I really wish I had known about the possible nutrient deficiencies so that I could arise as a result of the medications I was on so that I could have shifted my diet & supplements accordingly.

My story, like so many woman I’ve spoken to or had the opportunity to support, has a gut issue that leads to malabsorption of crucial nutrients needed to support your brain, and inflammation that also contributes to depression. Then when we layer on common medications like hormonal birth control & even SSRIS, we see a possible depletion of many of the exact nutrients we need to build brain chemicals.

If you are struggling with mental health I hope this blog has helped you. I can’t emphasize enough to get a provider who will do the deep dive with you & be diligent at investigating the pros & cons of medications for your body, your supplements, your diet, your sleep, your trauma’s, your gut health and your inflammatory triggers. In addition to this lens of functional health, I would say that finding a provider to support you with your traumas, emotional processing is essential. Without this level of work & combination approach, I honestly don’t know where I’d be today.

If you’d like to chat, you can learn more about what it looks like to work with me here.

In part 2 we’ll discuss my brain chemical imbalances & some of the things I’ve done to help myself get off the SSRI.

Disclaimer: This information is being provided to you for educational and informational purposes only. It is being provided to educate you about options to take care of your body and as a self-help tool for your own use so that you can reach your own health goals. It is not intended to treat or cure any specific illness and is not to replace the guidance provided by your own medical practitioner.

This information is to be used at your own risk based on your own judgment. If you suspect you have a medical problem, we urge you to take appropriate action by seeking medical attention.

The Top 6 Causes of Anxiety (Series I of II)

I had a big pitch for work in 48 hours and all I could think is “I’m going to fail, I’m going to screw this up, I can’t do this, they’ll see right through me, why can’t I get my anxiety under control”. As my mind spiraled, my face got hot, my feet started to sweat, I started hyperventilating and I couldn’t focus or do anything efficiently. Does any of this sound even slightly familiar?

The Top 6 Causes of Anxiety (Series II of II)

This is part II of a two-post series about anxiety. Be sure to read part I if you haven’t yet. In today’s blog, we are going to discuss the remaining factors that can often contribute to anxiety. As you may know, my goal is to encourage, inspire and educate you in ways so that you can reclaim your full health and well-being!

#56: My Journey Through IBS + Anxiety
In this episode, I talk about how the brain can be primed for inflammation through triggers that can result in mood disturbances & much more.

#70: A Brain on Fire – Coming Off My SSRI
I'm sharing about coming off an SSRI, how digestive issues and mental illness could be related, and how I'm supporting my mental health now.

This website uses cookies to improve your experience while you navigate through the website. Out of these, the cookies that are categorized as necessary are stored on your browser as they are essential for the working of basic functionalities of the website. We also use third-party cookies that help us analyze and understand how you use this website. These cookies will be stored in your browser only with your consent. You also have the option to opt-out of these cookies. But opting out of some of these cookies may affect your browsing experience.
Necessary Always Enabled
Necessary cookies are absolutely essential for the website to function properly. This category only includes cookies that ensures basic functionalities and security features of the website. These cookies do not store any personal information.
Non-necessary
Any cookies that may not be particularly necessary for the website to function and is used specifically to collect user personal data via analytics, ads, other embedded contents are termed as non-necessary cookies. It is mandatory to procure user consent prior to running these cookies on your website.
SAVE & ACCEPT